How has the COVID-19 Pandemic Affected Daily Spending Patterns?

How has the COVID-19 Pandemic Affected Daily Spending Patterns?

While the outbreak of COVID-19 and associated public health measures has had a dramatic effect on day-to-day life in Ireland, it has also had a marked impact on how we are spending our money.

New data published by Central Bank of Ireland has found that spending on credit and debit cards initially increased as the government announced the first set of containment measures on 12 March, before falling in the second half of the month. Meanwhile, the daily value of cash withdrawals from ATMs collapsed by 40 per cent over the same period.

The new figures are contained in an insightful real-time dataset which examines the developments in retail card spending in the weeks after the first confirmed case of COVID-19 in the Republic of Ireland.

During this fast-moving crisis, there is a need for timely, high frequency data to better understand the impact of the emergency measures on personal expenditure and economic activity. Most information used to monitor economic activity is of low frequency and available with a lag, such as monthly or quarterly at T+ 1 month. As part of the our wider work on developing a number of real-time indicators of economic developments during the current crisis, a daily collection of debit and credit card payment data was therefore established to assist with monitoring retail spending activity.

This “Behind the Data’” note looks at how our spending habits have changed since the emergence of the COVID-19 pandemic in Ireland.

The new daily card payments data, which is published alongside this note and will be updated weekly, relates to all point of sale transactions covering both online and in person transactions (pin and contactless), and ATM withdrawals. The data is a subset of the existing monthly Credit & Debit Card Statistics, allowing for comparison with previous months.

The data captures spending and numbers of transactions on euro-denominated credit and debit cards issued to Irish consumers and businesses. While only cards issued by the largest Irish issuers of credit/debit cards are included (representing 98 per cent of card transactions), their spending patterns in real-time during this period brings useful insights, which would not be attainable with lower-frequency data. Studies from the ECB, Reserve Bank of Australia, Federal Reserve and Bank of Italy also show the benefits of high-frequency retail transactions data as early indicators of household consumption and economic activity.

Spending Patterns Since the Beginning of the Pandemic in Ireland

Less than two weeks after the first case of COVID-19 was confirmed in Ireland, the Government announced the first set of restrictions to contain the spread of the virus, with school and childcare closures on 12 March 2020. The impact of the announcement on spending behaviour is clearly reflected in the daily card payments data. By the end of March, retail card spending (point of sale and credit card) had declined by 27 per cent when compared with the first week of March, and cash withdrawal amounts had almost halved (Chart 1).

Chart 1: Decline in card spending and cash withdrawal over March

(% change on first week of March) 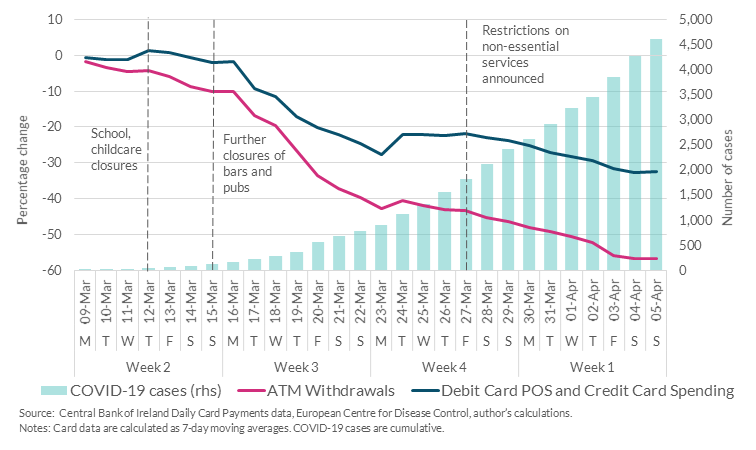 Spending activity on cards initially increased by 790,000 additional transactions (22 per cent) on Thursday 12 March, relative to the average of the previous 11 days, as multiple media outlets reported bulk buying following the Government announcement the same day. These additional transactions equate to an additional €42 million spending by Irish consumers, when compared with the average over the first 11 days of the month. ATM withdrawals, however, were down 10 per cent by the end of same week (Chart 1).

Total card transactions (including ATM usage) for March amounts to €5.4 billion (Chart 2). This represents a decline of 9 per cent when compared with March 2019, and is mainly owing to a marked decline in ATM cash withdrawals. 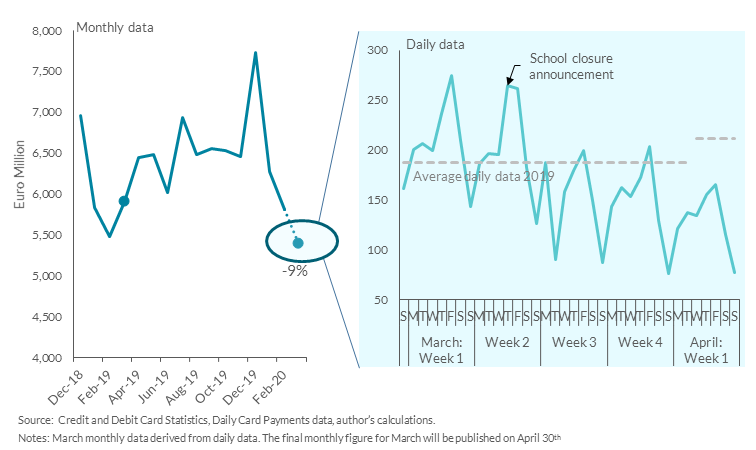 There is much volatility within the daily data, however, characterised by the timeliness of the government announcements as mentioned above. The value of transactions also varies greatly depending on which day of the week spending occurs (Chart 2).

An obvious weekly cycle is evident consisting of daily spending increasing throughout the week, peaking on a Friday, before declining to a low point on a Sunday. A working paper by the Bank of Canada also identifies a similar weekly cycle of peaks and troughs for debit card transactions and notes that high-frequency data can be very useful for monitoring expenditure patterns around extreme events.

To circumvent such days of the week effect, a seven-day moving average can reduce such effects when looking at longer term trends, as in Chart 1. The daily effect appears to have been sustained even after the stay-at-home government advice. This trend has also continued into the first week of April, although the Friday peak is less than previous Fridays. Spending is also down significantly on the daily average for April of last year. 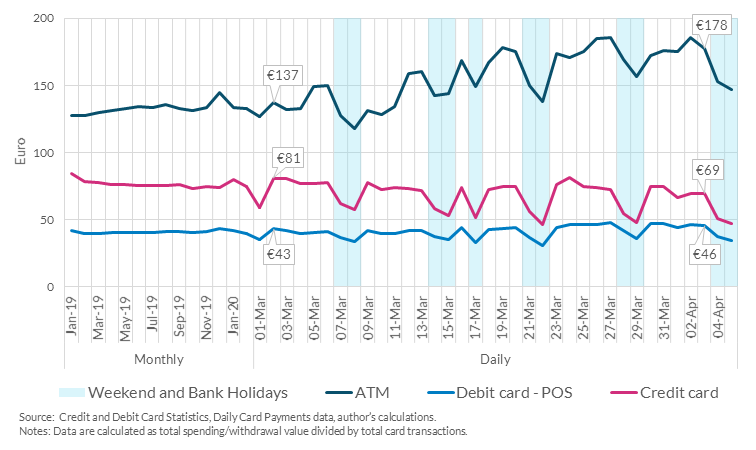 The average daily spend per debit card point of sale transaction was largely in-line with previous months, albeit increasing slightly at the end of the month. Credit card transactions have declined slightly, providing tentative evidence that larger purchases have reduced.

In fast-moving crises like the current pandemic, timely, high frequency data can assist with impact assessment of the crisis on underlying consumer demand and spending behaviour, which may be less obvious in less-timely monthly or quarterly data.

The daily card payments data presented in this “Behind the Data” reveal that overall, March was a month of two halves with respect to retail spending. The first half characterised by an increase in card usage and spending, while the announced restrictive measures had a dramatic impact on spending patterns in the second half of the month. A rise in the average cash withdrawal over the month suggests that while less cash may be demanded overall, customers may be choosing to limit their ATM visits.

As more data points are collected, some areas for further analysis include the potential for using the high-frequency data as a leading indicator for other economic activity series, and investigating a days of the week and seasonality effect.

Email creditinst@centralbank.ie if you have any comments or questions on this note. With thanks to Ciaran Meehan for excellent data assistance. Comments from Rory McElligott, Maria Woods, Mark Cassidy and Reamonn Lydon are gratefully acknowledged. The views expressed in this note are those of the authors and do not necessarily reflect the views of the Central Bank of Ireland or the ESCB.

Published by the Central Bank of Ireland April 2020